2.3 – Hypotheses regarding the Little Ice Age 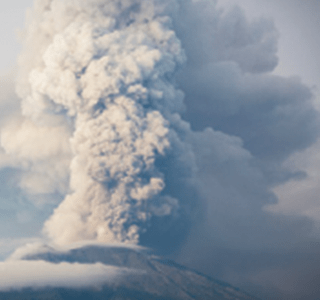 The timing of the Little Ice Age (1250–1800’s) is confirmed by evidence from historical documents and climate proxies such as ice cores, tree rings, and lake and ocean sediments. Scientists have several hypotheses regarding the advent of the Little Ice Age, although no single hypothesis is strong enough to claim credit for the entire 500 to 600 years of unusually cool weather. These are the probable causes:

Volcanic eruptions: The world experienced heightened volcanic activity throughout the Little Ice Age. There were significant eruptions around the world between 1580 and 1783 and a particularly violent eruption in Indonesia in 1815 that is blamed for the “year without a summer” in 1816. But why would volcanic eruptions begin a prolonged period of cooling? The answer is in the sulfur-laden volcanic ash that blasted into the atmosphere. Microscopic volcanic particulates in volcanic ash can blanket the atmosphere for years, blocking incoming solar radiation and eventually leading to global cooling. Sulfur particles also reflect the sun’s rays, further reducing solar radiation. Ice core samples taken in Greenland in the late 1900’s indicate higher levels of acidity – from sulfur – that correlate chronologically to volcanic activity in the 16th, 17th, and 19th centuries, leading scientists to believe that volcanic activity was a likely contributor to the cooler temperatures of the Little Ice Age. 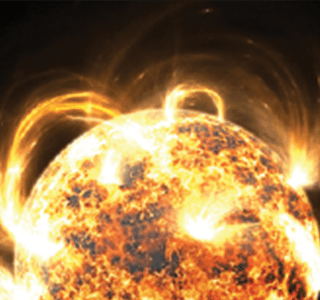 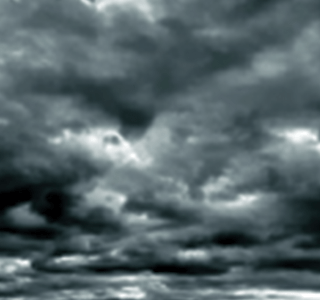 Solar activity: Research has linked large solar eruptions called sunspots to changes in Earth’s cloud cover. Prolonged cloud cover is known to affect global temperatures, typically cooling the atmosphere and causing increased precipitation. Astronomers who observed solar activity in the 17th and 18th centuries recorded extremely low sunspot activity from 1645–1715, a period now known as the Maunder Minimum, after astronomer Edward Maunder, who published papers on the subject in the 1890’s. During a 28-year period during the 70-year Maunder Minimum, astronomers recorded fewer than 50 sun spots; modern observations reveal 40,000 to 50,000 sun spots during the same number of years. Although the relationship between the frequency of sun spots and global cooling is not clear, some scientists hypothesize that sun spot activity could have been a factor in the Little Ice Age. The major deterrent to the hypothesis is the timing of the Maunder Minimum, which began anywhere from 100 to 400 years after the accepted onset of the Little Ice Age.

Ocean circulation: Complex interactions between the atmosphere and the ocean govern much of Europe’s climate, much like the El Niño and La Niña phenomena in the Pacific Ocean have a large bearing on weather in the United States, southern Canada, and Central America. All oceans are part of a global thermohaline circulation, a planet-wide interconnected network of cold and warm ocean currents that store and transfer heat energy across the globe. The movement of this heat through global ocean currents appears to affect the regulation of regional weather conditions and temperature extremes, stabilization of global climate patterns, cycling of dissolved gases in ocean waters, and delivery of nutrients to marine ecosystems.

One of Earth’s warm currents and a major factor in Europe’s weather is the Gulf Stream, which originates in the Gulf of Mexico and flows north along the eastern coastlines of the United States and Newfoundland before turning east and splitting into two currents in the mid-Atlantic Ocean. The northern current, called the North Atlantic Drift or North Atlantic Current, crosses the Atlantic Ocean to Northern Europe, where it subdivides and circulates off the coasts of Ireland, England, Norway, Sweden, Iceland, and Greenland. The southern stream, the Canary Current, recirculates off West Africa.

There is scientific consensus that the climate of Western Europe and Northern Europe is warmer than it would otherwise be because of the clockwise motion (west to east across the North Atlantic) of the warm water temperatures of the North Atlantic Drift. If, for some reason, the North Atlantic Drift slows or ceases, Europe’s climate seems to become much colder. In times of global warming, such as the Medieval Climatic Optimum (approx. 950 to 1250 AD), large amounts of fresh water entering the ocean from melting glaciers in the Arctic dilute the salt content of the ocean.

Less salt in the surface ocean water makes it “fresher,” thus raising the temperature for it to freeze. In other words, saltwater that normally would freeze at 28.4°F will now freeze closer to or at 32°F, depending on the level of dilution and salinity of the seawater. As more fresh water enters the North Atlantic Ocean, more ocean surface water freezes, which cools and weakens the North Atlantic Drift. A weakened, cooler North Atlantic Drift increases the potential for the climate in Western Europe and Northern Europe to cool and eventually become cold. In effect, a warm period and increased melting of ice sets the stage for a colder climate in portions of the Northern Hemisphere. The 300-year Medieval Climatic Optimum may have laid a foundation for the Little Ice Age and its impacts, particularly in Europe.

Changes in human populations: This hypothesis begins with the reduction in the population of Eurasia in the 1300’s due to the Black Death. The presence of fewer people caused a decrease in agricultural activity, which led to reforestation in many countries. More trees resulted in a greater uptake (absorption) of carbon dioxide from the atmosphere and a related cooling of the atmosphere, which may have been a factor in the cooling that brought on the Little Ice Age. A similar, compounding effect could have resulted from the decimation of Native Americans by epidemic diseases beginning in the early 1500’s. Land that Native Americans cleared for agriculture, which was considerable, also became reforested when the natives disappeared. A 2008 Stanford University study of sediment cores and soil samples suggests that carbon dioxide uptake via reforestation in the Americas could have contributed to the Little Ice Age. 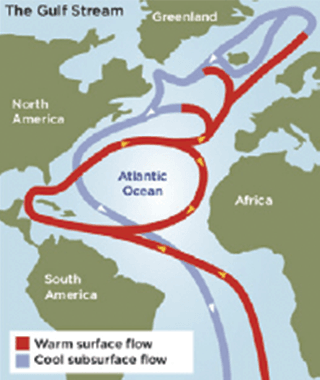 The Gulf Stream has an enormous impact on the temperatures
of the Atlantic Ocean, from the Gulf of Mexico to Greenland.
(JustinRayboun/adobestock.com) 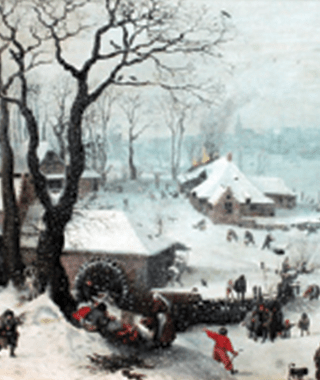 This 1565 painting, The Hunters in the Snow, by Dutch artist Pieter Brueghel the Elder, depicts winter in Europe during the Little Ice Age.  (Wikimedia Commons)

Unit 3 encompasses the Colonial Period in North America, which began with Columbus’ discovery of Hispaniola in 1492 and concluded with the end of America’s Revolutionary War with Great Britain in 1783. The unit offers a broad global view of events that led to the colonization of North America before narrowing its scope to the settlement of Pennsylvania. You’ll learn the reasons behind Europe’s interest in North America and the complex struggles that European powers waged among themselves to gain dominance in the new land. The environmental impacts of new cultural beliefs and practices will be presented through a historical perspective.