The Importance of Anthracite Coal

Anthracite coal was a mostly unknown and mysterious commodity in eastern Pennsylvania at the end of the 18th century. Some blacksmiths in the Wyoming Valley of present-day Luzerne County experimented with anthracite as early as 1768, but by and large, colonial Pennsylvania was content using its abundant lumber resources as fuel. Charcoal, made from wood, was the choice of blacksmiths and early iron-makers.

Demand for wood increased dramatically as the colony’s population grew in the 18th century, to a point where southeast Pennsylvania’s one-thick forests became very sparse. Large population centers such as Philadelphia, where wood was used for many purposes beyond fuel, were forced to rely on more distant forest resources. As a
result, wood became scarcer and more expensive. Philadelphia – with a population of 42,000 in 1800 – augmented its dwindling wood supplies by importing 1,000 tons of bituminous coal from Britain every year, and additional quantities from Virginia.

A fortuitous event took place in 1791 that eventually erased eastern Pennsylvania’s fuel shortage and altered the Commonwealth’s economy for the next 150 years. A German grist mill owner named Philip Ginder was returning to his log home near Summit Hill in present-day Carbon County after searching for rock that could be shaped into a new millstone for his mill. Ginder stopped to rest against a boulder and noticed black-colored rock exposed on the ground nearby. Aware of the
existence of “stone coal” in the region, Ginder thought he might have stumbled upon a coal outcrop. He broke off several pieces of the shiny black rock and took them to a Mahoning Valley blacksmith, who tossed a few of the rocks into a charcoal fire. After a long wait, the stones combusted and eventually provided a hot fire.

The impromptu experiment excited Ginder, who reasoned the rock must have value as a fuel if it ignited and burned. He took what was left of his discovery to Colonel Jacob Weiss, a transplanted Moravian from Philadelphia who had become a local entrepreneur and landowner along the Lehigh River. Weiss put the black stones in a saddlebag and rode his horse to Philadelphia the next day, promising Ginder that he would speak with several prominent friends in the city and return with their assessment of the rocks’ commercial value. 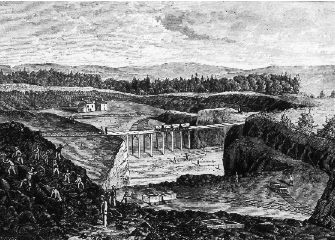 Weiss received encouragement from two Philadelphia businessmen, Michael Hillegas and Charles Cist, and with their financial backing and additional funding from Moravian investors in Nazareth, the Lehigh Coal Mine Company was formed in 1792. Ginder had not requested a financial reward, but did ask Weiss to assist him in
acquiring 308 acres next to the 100 acres he owned in Penn Township, at that time a part of Northampton County. Weiss followed through on Ginder’s request, but Ginder didn’t receive the land until six years later.

Meanwhile, the new Lehigh Coal Mine Company procured 770 acres in and around the area where Ginder found the stone coal; an additional 10,000 acres stretching across the Panther Valley were acquired not long thereafter. Weiss hired local German farmers to quarry the coal at an open pit mine atop Sharp Mountain near Summit
Hill, and in a short time the mine was producing about 268 tons of “stone coal” – anthracite coal – every 12-hour workday. A viable source of a new fuel had been discovered. Mining the anthracite, which was near the surface, was relatively easy with picks and shovels. Developing a market for the coal and delivering it to customers was another matter. Philadelphia was a potential gold mine for anthracite sales, but would the city welcome stone coal, and how would it get there?

Growing pains: There were no suitable roads in the early 1790’s to transport heavy wagon loads of anthracite to Philadelphia. The obvious transportation route was the nearby Lehigh River, a roughand-tumble, rock-filled stream that was a scant nine miles – all downhill – from the Sharp Mountain coal mine. A roughly constructed wagon road was built to deliver the coal to the river, and 25-foot-long wooden arks were constructed to carry the coal down the Lehigh and Delaware rivers to Philadelphia. Weiss, Cist, Hillegas and other investors spent $30,000 to blast away vertical shelves of slate that ran the width of the Lehigh River seven miles north of Allentown. Every precaution was taken to allow safe passageway for the arks, and all at great expense. 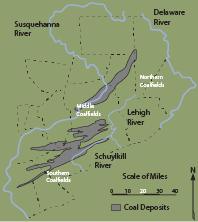 The Lehigh Coal Mine Company successfully mined anthracite and transported it on arks to Philadelphia during the next decade, via the connecting Lehigh and Delaware rivers. However, the company proved to be unprofitable for two reasons: 1) the lack of a ready market, as most Philadelphians’ wood stoves were not designed to burn
anthracite; 2) the loss of coal arks on the wild, hazard-filled rivers.

At the same time the Lehigh Coal Mine Company was losing money on the Lehigh River, other attempts were being made to exploit anthracite in the Wyoming Valley. A mine in Plymouth Township owned by Connecticut settlers, Abijah and John Smith, became a major producer of anthracite in 1807; coal was shipped down the nearby
Susquehanna River. A key to the Smiths’ success was the development of a home fireplace grate by Wilkes-Barre blacksmith Jesse Fell in 1808. 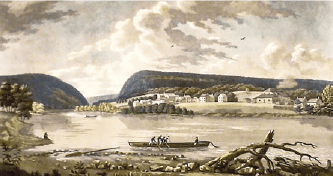 Of the various watercraft used along the Delaware River above tidal navigation during the pre-canal era, the Durham boat was the most important for trade and the transportation of anthracite coal. (Hand-colored engraving by William Strickland from painting by Thomas Birch, Philadelphia, c.1820)

The grate worked with anthracite, and made the use of anthracite as a domestic fuel possible.

In 1811, Charles Cist’s son, Jacob Cist, organized a partnership of Wyoming Valley investors and obtained a 10-year lease to Lehigh Coal Mine Company land at Summit Hill to mine coal, construct roads, and cut timber for arks. In return for the lease, Cist and his fellow investors agreed to ship a specified amount of coal to Philadelphia annually.

Cist’s entry into the coal mining business was very timely. America was becoming embroiled in the War of 1812 with Great Britain, whose powerful navy blockaded America’s eastern coast and effectively stopped supplies of British and Virginia bituminous coal from reaching American ports. The scarcity and high price of bituminous coal made Philadelphians willing to experiment with Cist’s anthracite.

By 1813, Cist and his Wilkes-Barre investors were shipping stone coal by wagon from the Wyoming Valley to Philadelphia. The anthracite found a ready market, but because of the distance between the mines and market – 120 miles – and the slow mode of transportation, Cist could not keep up with Philadelphia’s demand. As a result, Cist turned his attention to further development of the Lehigh Coal Mine Company’s properties at Summit Hill and improving the shipment of anthracite to
Philadelphia via the Lehigh and Delaware rivers.

In July of 1814, Cist hired a mix of Wyoming Valley miners, lumbermen, and ark builders and literally marched everyone to Summit Hill. On August 9, Cist took advantage of a rain-swollen Lehigh River and floated four arks of anthracite to Philadelphia. Three arks were lost in the Delaware River, but one made it to Philadelphia. Its entire load was purchased by Philadelphia entrepreneurs Josiah White and Erskine Hazard, who experimented with the anthracite at their nail and wire mill along the Schuylkill River just north of the city.

Meanwhile, the War of 1812 was coming to an end and shipments of bituminous coal from Great Britain and Virginia to Philadelphia began to resume. Cist was achieving some success shipping Lehigh anthracite down the Lehigh and Delaware rivers, but a continued loss of arks bit sharply into his profits. Combined with complaints that anthracite still was too difficult to combust, and the reappearance of bituminous coal, Cist and his investors were forced to end their enterprise. White and Hazard, however, were not done experimenting with stone coal.

Lesson 1 Review:
1. What geological events and forces were responsible for making
eastern Pennsylvania one of the few places in the world where
anthracite coal is found?
2. What is the primary difference between bituminous and anthracite
coal? What are the advantages and disadvantages of each as an
energy source?
3. What obstacles hindered the early coal industry? 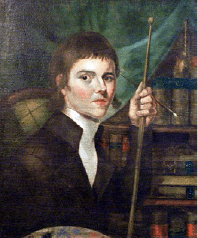 Jacob Cist was the first mine owner to float an ark of coal down the Lehigh and Delaware rivers to Philadelphia. (Jacob Cist painting courtesy findagrave.com)

The diagram below depicts the long-term formation of anthracite coal. Identify the various stages of coal shown, placing the name of the coal stage and the carbon content of that stage in the rectangle next to each number, 1 through 5. Use the information provided in Lesson 1. You also are to identify the two lines to the left of the diagram. They refer to forces involved in the formation of the coal.

The Formation of Anthracite Coal 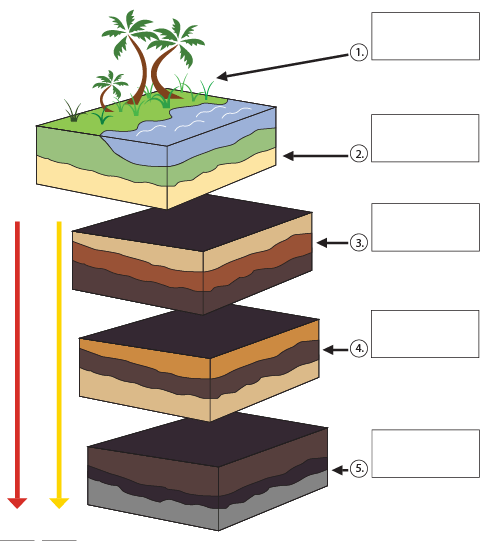 Unit 4 of Cultural Ecology of Eastern Pennsylvania – The Industrial Age – follows a lengthy progression of regional growth closely integrated with the industrial and domestic use of anthracite coal, a burnable natural resource found in abundance in the northern counties of the Delaware and Lehigh National Heritage Corridor. Anthracite’s presence in the Corridor was largely unknown in 1790 when Unit 4 begins; a century later, however, the shiny black rock was fueling virtually all of eastern Pennsylvania’s iron and steel furnaces, cement kilns, zinc smelters, and silk mills.